It's been a very busy, yet very fulfilling couple of days here in China.

Yesterday after I left off we headed to the hotel lounge for breakfast, and then loaded up on our bus at 9 am to head to Tiananmen Square and the Forbidden City to tour.  That was an incredible experience- to walk on stones that were laid down in the 1400s and to see the history we've been reading about and watching documentaries of come alive. 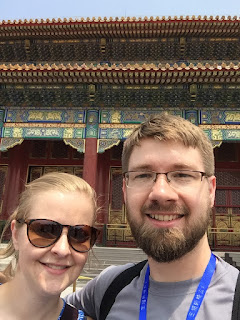 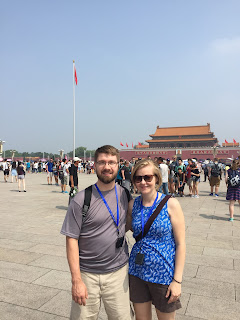 I continue to live in a state of having to continually remind myself that I'm really here- it all just seems very surreal at this point.  One pleasant surprise I've found is that I really haven't noticed the effects of jet lag too bad.  I think staying awake for a full 24 hour window actually helped so that on the very first night here I went to bed at a somewhat normal time and made sure to stay awake the entire next day.  I think if we had allowed ourselves to take naps yesterday when we were feeling tired it would have really messed us up.  We each woke up at least once in the night last night, but we both managed to fall back to sleep until the alarm went off at 5:30 am.  Waking up that early isn't nearly as hard as I would think, maybe because it's already daylight out, we're eager to see what the day holds, and also because we are going to bed much earlier here than we do at home (8/9 vs. 12/1).
After our tour of the forbidden city and the square we took a short bus ride to a traditional Chinese housing area, and took a rickshaw ride to a local family's house for lunch. 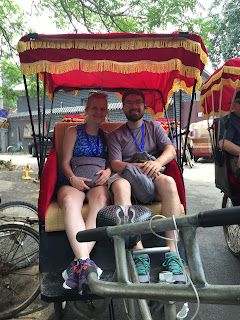 Because our group is so big (12 families or so) we had to split up into smaller groups and we each had lunch in a different area.  Our group consisted of us and three oth er couples.  This was a great time to get to know some of the families we are traveling with. Up until that point we were feeling a little like outsiders in our travel group as some of them had already started to get to know one another.  We are the youngest couple in the group, and also the only first time parents. 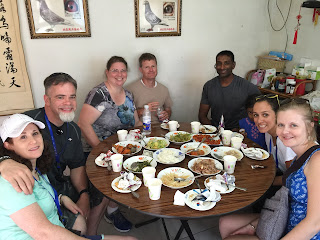 After lunch we came back to the hotel and then James and I got to experience something very special which I will tell you more about later.  For those of you who know that the special event was, just know that it went better than I could have ever imagined. :)
We arrived back to the hotel pretty late- it was almost 8pm and we were extremely tired, so rather than venturing out to find food we just ordered a pizza and sat outside in the hotel's "beer garden". The pizza was very overpriced and tasted like cheap frozen but we were too tired and hungry to care. I was so tired when we got up to the room I fell asleep while chatting to a friend, in my clothes from the day and with my jewelry still on. James was in getting ready for bed and said he heard my phone hit the floor and came in to find me completely passed out.
This morning we had to leave the hotel a lot earlier because they wanted to beat the traffic for the dragon boat holiday.  We got up around 5:30, grabbed breakfast at the hotel and met in the lobby at 7:15.  We drove to one of the many sites of the Great Wall and when we got there they gave us a few hours to climb.  It was really stressful at first because there were a ton of people going up and down and it was really congested and people kept stopping but once we got up to the first pass the crowd thinned out quite a bit. This was unlike any climb we had done before- this section of the wall was extremely steep, and sometimes there might only be a few inches between stairs and sometimes they are so far apart I feel like I'm going to do the splits trying to get my leg up high enough to reach the next stop. We managed to get to the highest point at the section we were in and then had to turn around and get back down, which was actually more strenuous than the climb up.  My legs were shaking so bad and it doesn't help that I'm afraid of heights and the stairs are extremely uneven so you can't really get a good rhythm going. 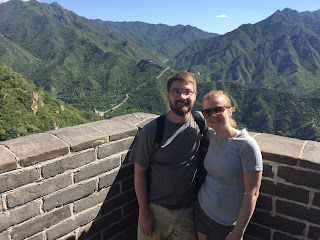 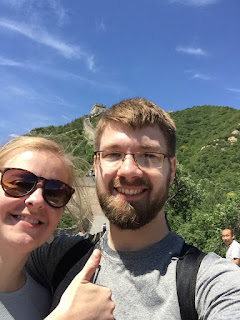 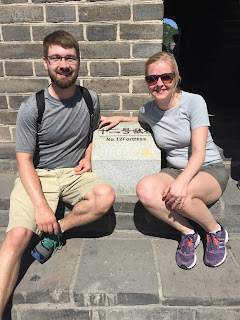 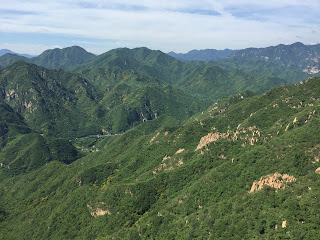 After the climb we had a while before our bus left so it was another good chance to chat a bit with  some of the families in our group.  Once everyone was back together we boarded our bus and headed to a government run restaurant and jade factory/store.  This was another group lunch, filled with lots of good stories and laughter.  There are a few families in our group who have adopted from China already so they had plenty of good stories to share with the rest of us.  Both days our lunches were served in tradiontal family style, where a large number of dishes are served to the group and they are placed on a big lazy suzan in the middle of the table and everyone shares.  Both lunches consisted of WAY more food than our group could possibly eat but this is a great way to try a lot of different options at once.  Many of you know what a picky eater I am, and it's been a huge relief to find that every meal we've had there have been a lot of options that I have really enjoyed.
Following lunch we all boarded the bus again and our driver drover us near Olympic Village to see the water cube and bird's nest that were constructed for the 2008 summer games.  One thing I've noticed about Beijing from driving around is how green it is- there are little mini parks everywhere and the big main streets are all divided with parks running all along the center.  I've never seem so many trees and flowers in a big city before.  Many people think of Bejing as very dirty and full of pollution but it's really exrteremly clean.. The air quality is certainly an issue but today was bright and sunny with blue skies and clear air for most of the day.  When the pollution does get really bad it just looks like a hazy/foggy day. It's easy to forget that it's anything other than weather.
After our lunch we went to an acrobatics show which was a really cool- it reminded me of a cross between Shen Yun and Cirque de Soleil. 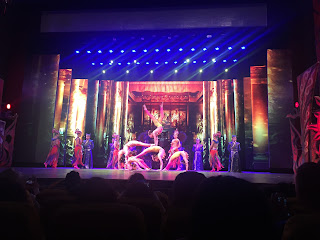 James and I lost track of our group's plans for the evening so again we just did our own thing for dinner.  We went for a walk in the area near our hotel in search of a good noodle shop but didn't find one so we just ended up at Pizza Hut instead.  It was nice to get out and walk around without a big group so we felt like we just blended into the crowd a little more.  We wlalked through the big shopping district with the big Apple Store and all the designer name stores (Prada, Tiffany & Co, Rolex, Gap, etc).and then also stumbled across the well-known "food alley" street with the all street venders selling everything from steamed dumplings to cooked starfish and cockroaches on a stick. Interesting experience but no we didn't try anything.
We got back to our room and took much overdue showers and got our laundry going.  Tomorrow morning we have to have our luggage ready by 5:30 am and then depart the lobby at 6:15 to head to the train station for the bullett train to Zengzhou, where we will get Will and our adoption will become official.  I'm really excited for the train ride- the train goes over 200 mph and  we are traveling with one other family so it will be nice to get to know them a little better.
Well, that's all for now, I'm struggling to keep my eyes open and my alarm goes off way too soon!  Thanks for all of the prayers and well wishes- we are having a great time and are so excited to get Will on Monday. I hope you're all having a great week!
Posted by Kristen.Adele at 10:18 AM

Kristen.Adele
Grand Rapids, MI, United States
Though I was born and raised in Michigan, I have always had an "international heart." Whether it be traveling abroad, meeting others who have grown up abroad, reading books, watching movies, working with local refugees, or living vicariously through friends and family who get to travel I have always had a deep yearning to learn more about other peoples, places, and cultures. Thankfully my best friend/life partner/husband of 7 years has the same outlook. I've also always had a huge spot in my heart for adoption. Before we even began dating I made sure to ask my now-husband if he would be up for the journey, because I've always known that I would adopt children. We've finally reached a place in our lives where we feel ready, and invite you all to follow along in our journey. I ask only for your prayers and support as we endure this great adventure that is sure to be filled with trials, tribulations, and heartache but will hopefully end in the growth of our family.