Well, a lot can change in just 2 weeks!

I have been meaning to do an update for almost a week now, but every night has been busy and now there is a lot to catch you all up on!

I have so many ideas for blog posts in my mind but since it's getting late and I have big news to share I will cut to the chase and make this an update style post, but I do have so much other stuff on my heart that I hope to share with you soon. 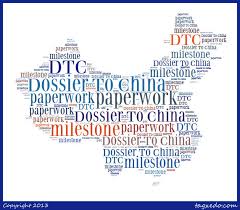 First of all, we got great news on 2/12- are are officially DTC!  (Dossier to China)
But even better, we got word that the little boy who we were matched with in December, the boy who stole our hearts and I haven't stopped thinking about and praying for since was matched with a family!  That is really all I know at this point and I hope and pray we somehow get to connect with his parents at some point so that we can follow his progress but either way, I feel like I can finally sleep a little better at night.  I knew in my heart that God had a plan for him, and that God was going to find the perfect parents to care for his medical needs but it was just killing me to see it picture every day on my agency's web page.
I kept telling James that there was no way I would be able to accept another match if he was still waiting for a family, because it would just feel like I was letting him down.  I still lay awake at night wondering if we could have made it work for him to be our son, but it's not fair to commit to a child that you aren't 100% certain you can provide everything he may need, and we were definitely not certain.
And it's a good thing that this all happened on Friday, because Monday we got a call from CCAI- with ANOTHER MATCH!  I tried SO HARD to remain calm and collected this time and not let myself get all worked up and instantly attached like we did the last time.
I got the call at work, I think it was around 3 pm.  They explained on the phone that they had a little boy who had just turned 3, and that he had limb malformations (that's really all I can say at this point).  He asked if I'd like to review the file and I said yes, so just like last time he said to let him know within 24 hours if we were interested, and then if we were we had until the following Monday to give them our final answer.
I did take a quick peek at the photos before I left work, and wow, is he ever a cutie!
I called James around 4 pm and told him not to work late, to come right home because we had another file to look at.
When we were both home we reviewed everything together and right away I felt there was no doubt in my mind that we were totally prepared to be his parents.  His medical needs are something that is totally within our ability to care fore, and will allow me to return to work and him to daycare.
James said he was definitely interested in getting more information, so I called my friend Carolyn (who is a pediatric NP) and had her review the file to help us decipher the medical terminology and labwork/blood tests.  James needed time to think everything over and process things, so we decided to sleep on it and have the orthopedic PA who helped us last time take a look at his xrays and medical information just to affirm what we thought about this possible treatment plans, etc.
The next evening when I got home form work James came in so excited to show me videos of really neat prosthetic devices that might one day be helpful to our kiddo and he said he was ready to make a commitment to this child.  We sent off the email to our adoption agency and began making phone calls to family members.
It felt so good to finally know that I could let my emotional guard down a little and allow myself to say THIS IS MY SON!

I can't wait to share his photos with all of you, but I cannot do so until we have approval from the Chinese government to adopt him, so just hang tight.

We are so incredibly blessed that he is in a WONDERFUL foster home, and we have so many photos and videos and information on him.  He is such a bright, happy child and is laughing in almost every picture we have.  The videos they sent me show that he is incredibly intelligent and determined.  My heart beams with pride watching him overcome his physical differences and do whatever task is set in front of him.  I have no doubt in my mind that this child will be completely capable of doing anything he puts his mind do.  The only limitations he will ever know will be those that other people teach him... and we certainly won't be those people!

So what next?
We sort of have two processes happening simultaneously.
We are still waiting on the news that we are LID (logged in dossier), and then from there we will wait to hear that we have LOA (letter of approval)

Also happening now, we just submitted a LOI to the Chinese government stating our request to adopt this specific child, so we will wait for them to approve us.

Even though we have been in the process for a while now, in terms of China they didn't really know we existed until just this week... everything we have done up until this point was for our home study and/or our adoption agency.... so now we have to wait for the whole approval process to go through on China's side.

After that we go through all of the steps with the US Immigration to bring this kiddo into the country and get his citizenship.

All of this to say.... even though we would love to jump on a plan tomorrow to go get our little guy, we've got a long wait ahead of us.  Most likely time frame is 4-5 months.  I'm hoping for sooner and planning for longer just so we don't get our hopes up and later face disappointment.

We still have a long way to go before we are fully funded so we will continue working on fundraising and grant applications, and try and fight the urge to buy every cute thing we see... and boy is it hard.  Leaving Costco last night without a swimsuit, life jacket, mini beach chair, adorable Easter/dress suit, and toys was nearly impossible, but I did it!  I will not let myself buy clothes until we are closer to travel!

Well it's getting late and I have to get ready for work tomorrow but I wanted to keep everyone posted as to what's going on.

I look forward to sitting down this weekend and finalizing a name, and hopefully getting started on getting little man's bedroom ready!  I've never been more excited to redo a bedroom before!!!
Posted by Kristen.Adele at 9:59 PM

Kristen.Adele
Grand Rapids, MI, United States
Though I was born and raised in Michigan, I have always had an "international heart." Whether it be traveling abroad, meeting others who have grown up abroad, reading books, watching movies, working with local refugees, or living vicariously through friends and family who get to travel I have always had a deep yearning to learn more about other peoples, places, and cultures. Thankfully my best friend/life partner/husband of 7 years has the same outlook. I've also always had a huge spot in my heart for adoption. Before we even began dating I made sure to ask my now-husband if he would be up for the journey, because I've always known that I would adopt children. We've finally reached a place in our lives where we feel ready, and invite you all to follow along in our journey. I ask only for your prayers and support as we endure this great adventure that is sure to be filled with trials, tribulations, and heartache but will hopefully end in the growth of our family.